WHY DO YOU NEED ION CELL CLEANSE?

A water molecule is composed of two hydrogen atoms and one oxygen atom. When the molecule loses a hydrogen atom, the remaining OH molecule takes on a negative charge. As you walk along the beach, your body absorbs millions of these negatively charged ions, which alkalinize the blood and tissue. Because of poor diet and high stress we tend to accumulate and store excessive quantities of waste products, such as dietetic, lactic, pyruvic, uric, carbonic, asetic, butyric, & hepatic acids. Avoiding disease and maintaining vitality, as we age, requires the maintenance of an alkaline environment throughout the body – which is virtually impossible to do in our high tech, high stress toxic society, unless we can walk on the beach everyday.

The Gencel Ion Cell Cleanse creates exactly the same environment as the walk on the beach, only more powerfully because your feet are in direct contact with the ions being manufactured in the water. Place your feet in the water, turn on the unit and within seconds millions of ions enter your body and begin to neutralize these acid wastes. The particles, fat and mucus residues found in the water after bathing reflect the wastes that have left the body during the 20 to 30 minute session. After cleansing the body of impurities you may find that you are thinking more clearly, are having more energy and are enjoying a greater sense of well-being.

An Ion is a charged atom that has gained a magnetic field capable of attaching to and neutralizing charged particles. These neutralized particles are extracted from the body through the process called osmosis. The array is placed into the water alongside the hands, feet or body while the power supply delivers a low level direct current to the array. This causes the metals within the array, in combination with water and salt to generate positively and negatively charged ions by separating oxygen and hydrogen in the water. (For the purpose of this discussion of the Ion Cell Cleanse process, positive and negative relate to electrical rather than chemical phenomena). We speculate that ions generated by the Gencel Ion Cell Cleanse travel through the body attaching themselves to a multitude of toxic substances, thereby neutralizing their positive or negative charge. It may be possible to reduce pain and other symptoms caused by a l

When the Gencel Ion Cell Cleanse is set to positive, a positive polarity generates a negative ion flow which, we believe, raises blood pH from acidic toward alkaline. Approximately, 95% of people in this culture experience a state of acidity. That is, their bodies possess an excess of hydrogen ions, and their blood pH is lower than 7.45.

Water, salt and the metal in each of the units interact with each other to produce ions. These ions will neutralize everything they come in contact with including toxins that are in tap and filtered water. Generally one does need to add non-iodised salt to the water in order for it to be conductive enough

The live blood cell analysis pictures on the right are photos of the blood before a thirty-five minute GenCel Ion Cell Cleanse foot soak. Amazingly the photo on the right is the same blood 35 minutes later. 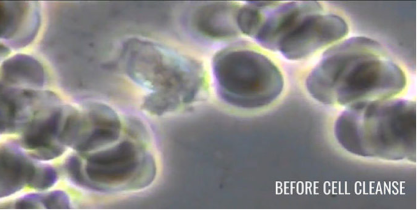 WHAT ARE THE COLORS IN THE WATER ?

Many colors and objects appear in the water during an Gencel Ion Cell Cleanse session. There is a reaction to the particles and toxins in the water, the metals in the array, and the acidity or alkalinity of the person being bathed. All of these combine to produce color and it is important to understand that colors will change color even if the unit is operating without anyone’s feet submerged in the water. The basic color produced from these reactions varies from one geographic area to another. The color change reflects the interaction between all of the variables in the water and the array, as previously described. The toxins in our bodies will look the same as the toxins predominant to a specific area; however, there will be more toxic particles in the water with a persons feet submerged in it. You will also find that water-based toxins will not stick to the side of the basin and the array, whereas substances pulled from the body will form a sticky ring that must be removed with a detergent.

WHAT DOES THE
WATERCOLOR CHANGE REALLY MEAN?

When the water becomes excited it ejects these tiny particles, and they become visually observable in the water. This will tend to make the water look dirty brown. Of course, just how dirty the water becomes is related to how much sediment is in the actual water. When you check a bucket of water to see this principle (with no body parts in the water), how dirty it actually becomes will generally be the same each time you use a new bucket of water from the same source. If you were to run this test over and over again but with a different person’s feet in the water each time the results would be amazingly different. Sometimes the water will be dirtier and sometimes cleaner. Because everybody’s ability to absorb energy is different, the reaction of the water will also be different. Note: While the color changes in the water can be dramatic, it is not the most important factor and one must be careful about making any judgements solely based on the water color. Some waters do not change color and it is not always an indicator of whether energy is being produced. The best indicator that may be found in the water after a treatment would be the presence of an oily substance located on the container at water level. It generally contains materials released from the outer layers of the skin. Another indicator after treatment can be found in the color change in the urine of the individual who has been treated.

WHAT IS THE SIGNIFICANCE OF EACH COLOR?

You can easily test this for yourself, if you have the opportunity to run the ion cleanse in a container of water with no body parts in it. You will probably see a pretty dramatic color change take place – although some waters do not change color, (even with feet in the water), The person using the water does influence what the water will look like as well, so that even using the same water source, the way the water looks can vary greatly among individuals. The Gencel Ion Cell Cleanse is energy medicine, and we believe that the most benefit and detox is achieved AFTER a session – not necessarily during a foot bath. When the body is better balanced and charged, it will be better able to detox through it’s regular channels such as the kidneys, colon and liver. The degree of detoxification will be reflected in symptomatic improvement, not water color change. The water color change has to do with the combination of industrial and chemical pollutants common to a given geographical area.

We have also found that a person’s detox session will override the geographical toxicity of the water. Based on EAV (Electro Acupuncture by Voll) testing, the following table shows what we believe are the meanings of the color changes:

Detoxification and purification of the body has been practiced for centuries by every culture in history.

Please subscribe to receive all the latest Lucid news.